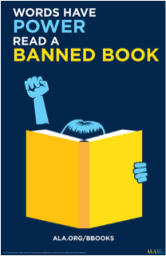 Each year during the last week of September, libraries and communities work to celebrate Banned Books Week. This week embraces books that have been banned or challenged over the years. “Banned” refers to the selection being taken off the shelf while “challenged” means that someone such as a parent or patron have requested to have the book removed (Petrilli, 2009). This is more common than banning books and happens across the United States. In 1982, Banned Books Week was celebrated for the first time. This was in response to a rise in challenged books across communities (Ballard, 2015). It took off and became an annual event each year. 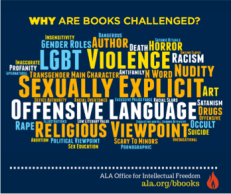 A list is created each year of the most challenged book. The top ten list from 2007’s included, And Tango Makes Three by Justin Richardson and Peter Parnell, The Chocolate War by Robert Cormier, Olive’s Ocean by Kevin Henkes, The Golden Compass by Philip Pullman, The Adventures of Huckleberry Finn by Mark Twain, The Color Purple by Alice Walker, TTYL by Lauren Myracle, I Know Why the Caged Bird Sings by Maya Angelou, It’s Perfectly Normal by Robie Harris and The Perks of Being a Wallflower by Stephen Chbosky (Petrilli, 2009). Many of these books are popular titles yet have all been deemed not worthy or inappropriate for public consumption by someone or a group in the community. The most popular reasons for challenges include being sexually explicit, containing offensive language, LGBT themes, religious viewpoint and violence (American Library Association, 2013). These are subject claims that people use to justify their value claims. 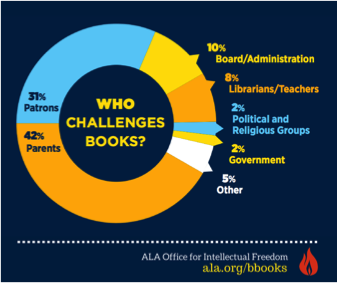 During this week libraries across the United States work hard to celebrate these books. They are supported by the American Library Association and the Freedom to Read Foundation. Some ways they do this is by creating book displays with the challenged books showcased. There are promotions of it on social media platforms such as Facebook. Communities also hold discussions or readings of these challenged book (Ballard, 2015). Community members are encouraged to read these challenged books through these events to from their own opinion.

Banned Books Week is important because it helps prevent censorship of different points of view. Censorship is suppression of ideas and information because a group in power deems them objectionable (American Library Association, 2013). Parents often feel that that removing uncomfortable titles will protect their children (Petrilli, 2009). However, they are infringing on the intellectual freedom rights of others in the community. Intellectual freedom covers the right to seek and gain knowledge from any point of view without restrictions (American Library Association, 2013). Removal of books from community settings prevents the public’s right to gain knowledge without restrictions.