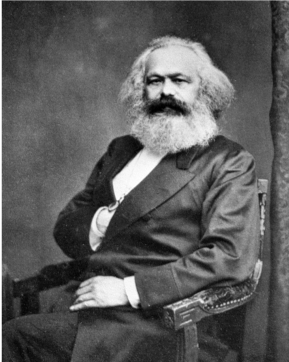 late 1920s and early 30s. It was at this time that Max Horkheimer was the director of the institute and set the groundwork for this school of thought. Many philosophers, economists, and psychoanalysts worked in collaboration on this school and its values, including Theodor W. Adorno, Friedrich Pollock, and Walter Benjamin. These gentleman were largely inspired by theories of Karl Marx (pictured right), and relied heavily on his piece of writing Critique of Political Economy in outlining their values (Wellmer 2014).

Along with the Frankfurt School of thought, the practice of critical theory was born, and is quite possibly the largest contribution of this particular school. Critical theory examined the state of society, especially the relationship between members of the proletariat and bourgeoisie, and identified the ways in which members of lower classes were exploited. What separates critical theory from other schools and methods of analysis is that its ultimate goal is the liberation of humans and the construction of a new and better society in which all people have equal and fair opportunities for developing themselves.

In addition, this school of thought recognizes and promotes the idea that in order to obtain such a society there is a necessity for struggle and trials which must be overcome. The main journal of this institute is titled Studies in Philosophy and Social Science (Wellmer 2014).

With the emergence of World War II, however, the work of this school was briefly put on halt. In 1933 Nazis forcefully closed down the institute. In order to keep things running, Horkheimer hid the funds from the Nazis and reestablished the Frankfurt school in New York City (Wellmer 2004). This move to America allowed the Frankfurt school to spread its ideals and bring its German intellectual traditions across the ocean to other parts of the world (McLaughlin 1999). At the conclusion of World War II Horkheimer then moved the school back home to Frankfurt.

Horkheimer was a largely influential member of the Frankfurt School. He hoped that his studies and the development of critical theory would lead to the organization of a society which would move beyond the contradictions and divides caused by capitalist structures of private property. It was his belief that the production of commodity had become a challenging obstacle in the journey of human progress (Wellmer 2014).

One of the most influential scholars of the Frankfurt School was Walter Benjamin. In his essay, “The Work of Art in the Age of Mechanical Reproduction” he discusses how works of art can be a significant tool in overcoming the looming threat of capitalism. He first critiques capitalism, saying that it mainly exploits the proletariat and members of the lower class. Benjamin then goes on to describe how reproductions of art can be used to overcome this. By reproducing works of art, that art then becomes more available to the general public, thus, eliminating the elitism which it once had and removing its reservation as something available only to those of the upper-class. This, he believed, was one possible method through which we could begin to modify society and make it a place for people of all social standings (Benjamin 1969).

McLaughlin, N. (1999). Origin Myths in the Social Sciences: Fromm, the Frankfurt School and the Emergence of Critical Theory. The Canadian Journal of Sociology, 24(1), 109-139.

Image attribution: Both images used in this post are within the public domain