The GamerGate controversy was a misogynistic firestorm concerning sexism in gaming culture that began in 2014 (Campbell 2017, Martin 2017, Fabos 2017) when computer programmer Eron Gjoni claimed that his ex-girlfriend, game designer Zoe Quinn, cheated on him with a writer at Kotaku, a well-known gamers’ website (Campbell 2017, Martin 2017, Fabos 2017).

Hundreds of male gamers began attacking Quinn with anonymous threats (Lotte 2016). This became a global act of misogyny and high-profile women in the gaming industry across the world were all facing online threats and attacks, especially over Twitter (Lotte 2016).

When Anita Sarkeesian, a feminist cultural critic and one of the targeted women, spoke out against the deeper gender problem in gaming culture (Barr 2016), she found herself the victim of doxing, meaning that her personal and private information was made public (Campbell 2017, Martin 2017, Fabos 2017).

Other high-profile women included game developer Brianna Wu and journalists Katherine Cross and Maddy Myers (Campbell 2017, Martin 2017, Fabos 2017). They also found themselves victims of swatting, which is where someone calls in an anonymous tip to the police so that the place where the victim lives can be raided by a SWAT team (Campbell 2017, Martin 2017, Fabos 2017).

Many of the victims had to leave their homes after their addresses were leaked online because they received threats where they lived (Lotte 2016). The GamerGate campaign was coordinated in the online forums of Reddit, 4chan, and 8chan in an anonymous movement that ultimately came to be represented by the Twitter hashtag #gamergate (Moore, 2014). The harassment included threats of rape, death threats and the threat of a mass shooting at a university speaking event (Lotte 2016). During this time, the mainstream gaming news media was ignoring the misogyny of GamerGate (Barr 2016).

This blatant disregard for the misogynistic attacks can perhaps be attributed to how the presence of women in the digital media landscape is viewed as threatening to the idea of a masculine gamer (Lotte 2016). When it comes to redefining the gamer identity (Barr 2016), too many people conflate this identity with the outdated notion that white, heterosexual teenage boys are the only gamers allowed (Barr 2016). The current gaming culture climate is still deeply affected by the gender problem that helped cause the global controversy that is GamerGate, but women all over the world are coming together against misogynistic attackers to ensure change in the digital gaming industry (Campbell 2017, Martin 2017, Fabos 2017).

The picture on the above (Moore, 2014) tracks the use of the GamerGate hashtag on twitter on November 26, 2014 alone. Clearly, the hashtag was used by people all over the world, and this picture can be used to analyze how the different social media platforms, mainly Twitter, used a hashtag to spread their misogynistic vitriol. The picture that follows (Murphy, 2015) is a photo of Brianna Wu, a video game developer who faced GamerGate threats. Here she is leading a presentation detailing the issues within the gaming industry and the impact of GamerGate. 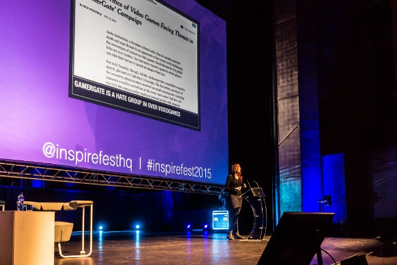 The images used in this post are for education purposes.