During the heated time around the Cold War in 1947, members of Congress started investigating Hollywood for having suspected ties with the Communist Party. The House Un-American Activities Committee, or HUAC for short, began aggressively hunting for any communist ties or political radicals in the film industry which then led to the now famous, Hollywood Ten (Campbell, R., Martin, C. R., & Fabos, B. 2017). 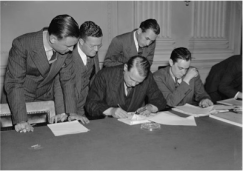 film industry to declare their loyalty and patriotism to the American government as well as to share the names of their colleagues who are suspected of “having politically unfriendly tendencies.” Many film executives, directors, producers, and actors were happy to comply with HUAC and gave up the names of colleagues easily and readily. Amongst these famous names that were friendly with HUAC was Jack L. Warner of Warner Brothers, actors Gary Cooper and Ronald Reagan, director Elia Kazan, and producer Walt Disney (Campbell, R., Martin, C. R., & Fabos, B. 2017). According to Campbell, Martin, and Fabos (2017), Jack L. Warner even went out of his way to suggest that when film makers poke fun of America’s wealthy, make fun of the political system, or if their movies were compassionate towards minorities then these were signs of communist propaganda.

Ten witnesses were questioned about their involvement in varying organizations. These were the “Hollywood Ten” who consisted of nine screenwriters and one director. Nine of said members of the Hollywood Ten are pictured to the left. The Ten refused to comply with HUAC and discuss their associations with any organizations or to surrender the names of any communist sympathizers (Campbell, R., Martin, C. R., & Fabos, B. 2017). In November of 1947, the men of the Hollywood Ten were charged with “contempt of Congress” which obviously violated their first amendment rights but because of the tensions from the Cold War, many people were worried that subliminal messages planted in films would tarnish the “American Way” (Campbell, R., Martin, C. R., & Fabos, B. 2017).

When they were released from jail, the damage had already been done. The screenwriters and director were blacklisted or even boycotted from any major studio. Their careers in the film industry seemed ruined.

Scholars today still look at the incident of the Hollywood Ten with an ambition to see how this event reverberated through history. According to Eckstein (2004), a position that modern scholars have looked at is whether or not the hunting down of Communist Party sympathizers in Hollywood result in a sort of cultural holocaust. There are several positions to be taken with this. The Hollywood Ten were not wholly innocent as most of them were strong and stern supporters of Stalin who has access to deliver out the Communist Party’s values to the American public whether intentional or not. At the same time, The Hollywood Ten were still victims of oppression from the U.S. Government and the HUAC hearings or their blacklists from their work industry is not by any means justified (Eckstein, A. 2004).

The hearings and investigations conducted by HUAC could be seen as harsh and unconstitutional. The fear by the American people and those who were in positions of power are justified due to the looming tense relations from the Cold War, however, the result of that fear is the reputation of members of the film industry to be Hollywood. Whether or not scholars and the public side with the Ten or the American Government and HUAC, there is no doubt that both sides had faults. The Hollywood Ten were treated as martyrs but nonetheless, they were not innocent martyrs (Eckstein, A. 2004). The events concerning the Hollywood Ten is an insight to how even constitutional rights and freedom of expression can be put aside when dealing with possible threats to the nation.

Image Attribution: Both images used in this post are in the Public Domain