George Ritzer created his theory of McDonaldization in 1993. Ritzer was able to do this by analyzing the economic practices that McDonalds employs. Ritzer claims that these practices have a huge impact on the structure of global corporations as well as everyday life (Ritzer, 2013). Ritzer was able to utilize many past theorists because his theory is so recent. Ritzer developed this theory through the main influence of Max Weber. Weber discussed rationality in the terms of social action. Weber theorized how social action can be affected by rationality and rational actions.

Ritzer was also influenced by Karl Marx’s ideas behind alienation. Marx regarded capitalism as the main source of conflict in human civilization as well as the root cause of class conflict and divide. Marx’s ideas behind alienation included that alienation of the worker was caused through any employment done under capitalism. According to Marx, employees were alienated from their work, from each other, and socially alienated while under capitalism. Many of Marx’s main ideas can be seen through the negative aspects that Ritzer outlines in McDonaldization. Marx was able to identify certain aspects that were indicative of capitalist system in order to formulate his theory. Ritzer analyzed McDonald’s business plan to identify the reasons behind their success. Ritzer then cross-examined this among the business practices of global corporations.

The efficient, predictable, and calculable burger

Ritzer operationally defines the four tenants as well as identify how they exist in McDonalds. Efficiency is defined as the most cost-effective methods to reach a goal, as well as preventing unnecessary waste. For example, items on the McDonald’s menu are hand held items like burgers which don’t require utensils. Since there are no utensils, this is an example of cutting down the waste of plastic utensils. Food products are always specifically measured at McDonalds in order to to reduce food waste as well (Laughey, 2007). This is an example of calculability because the company is calculating exactly how much food product can be used on every meal. For example, every McDonald’s hamburger is the same width and weight in order to ensure that each customer is paying and receiving for the same amount of food. Predictability can be seen through the on-going expectations that customers have when walking into McDonalds. Every time one goes into any McDonalds across the country, one can expect the same food and service. This is the reason behind predictability as being defined as expecting the same characteristics every single time.

Control in the McDonaldization theory can be seen through how McDonalds is able to control every action of the customer. Control occurs in the pre-made lines, predetermined menu that comes with little customization, and the pre-prepared ingredients (Laughey, 2007). Ritzer poses that these four tenants helped to increase McDonalds success on a global scale. The main point of Ritzer’s theory is to apply it to other social arenas and determine how McDonaldization has affected social activity and history.

It is easy to apply efficiency, predictability, control, and calculability to communication and media studies. The most recent example of efficiency can be seen through the news alerts that appear as alerts on notifications on iPhones. News companies want users to get the most amount of news in the shortest amount of time possible. The short passages that appear as notifications help to efficiently perform this. The commercials that occur during sports games effectively demonstrate calculability in the media realm. Time-outs are used for commercial time so that television companies can continue to make money when sports are not being played. In fact, certain time-outs are cut into sports games for increased sales in advertising spaces.

Predictability is often seen in the reuse of scenes across Hollywood productions (Laughey, 2007). If one director uses a scene in a film and it causes a good reaction from the audience, another director will copy the same idea behind the scene. In romantic films, one can see the same kissing scene in the rain being used in many films. Control can be seen in the procured image that celebrities are given by their managers, publicists, and agents. Every public statement, outfit, and action performed by a celebrity is predetermined (Laughey, 2007).

There are many negative aspects of McDonaldization that Ritzer outlines based on many of the examples above. Ritzer posits that McDonaldization is exploiting the consumer as well as starving the general public of creativity. Similar to Marx’s theories behind alienation, Ritzer claims that the public has no autonomy on the products in which they receive while the employees have no creativity in the work they are doing (Ritzer, 2013). This can be seen in the above noted example of the celebrity image. Celebrities are told what to do, say, and how to act so they have no original or creative thought in their work. Consumers are also being exploited into believing they are buying a product from a certain person when in actuality that is just a shaped and molded version of a real person. Ritzer’s theory of McDonaldization can be seen in other places besides the media as well. 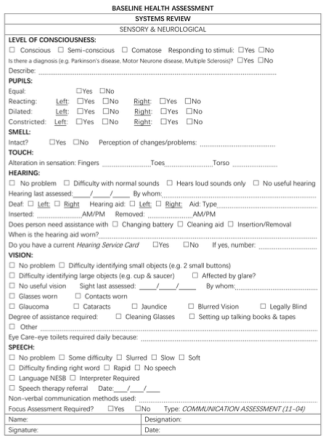 The necessary orders and information nurses must complete

Ritzer’s theory became used by many other theorists to identify trends of McDonaldization in other parts of life. In a study done in the United Kingdom, McDonaldization was proven to be seen in their healthcare system. New guidelines for nursing staff as well as health professionals in general were put into place in order to measure compassion (Bradshaw, 2009). This guideline was put into place due to the “cold”, “bureaucratic”, and rational ways that health professionals were treating patients (Bradshaw, 2009). Instead of treating patients as patients, health professionals followed the rational instructions that were passed down to them.  McDonaldization can be seen in the lack of input and creativity that nurses were able to give to their patients. Nurses were unable to treat their patients with care and compassion because their mindsets were so heavily engrained in the rationality of the process.

Ritzer’s theory of McDonaldization can be seen more specifically in McDonalds across the globe. Each part of the world is encultured differently, so McDonalds was forced to adapt their business model to the various global locations. This is the main thought behind Ritzer describing McDonaldization as a global process. The first McDonalds set in China did not have a huge impact on life nor was it very successful. McDonalds was forced to teach citizens their ways of efficiency just as they did to Americans. Initially, Chinese citizens did not understand the idea behind a line to order food. People would cut in front

of others and people would wait a long amount of time just to order food. McDonalds had to teach the citizens about lining up in order to control their consumers into the most rational food ordering process. At first this was a difficult task, but then McDonald’s ways were imposed on the Chinese citizens. The change in social action can be seen by customers learning to adapt their usual ways to McDonald’s rational steps. The menu was also an issue on a global scale. Chinese citizens eat meals very differently than Americans, so McDonalds was forced to adapt to their ways of serving food. McDonalds offers burgers for breakfast in China because that was the most successful and rational option for the company. The types of things on the menu also changes from country to country. Despite the adaptations that McDonalds had to enact, their success still reaches populations on a global scale. Their influence on social action continues to exist in McDonalds as well as various other institutions.

Figure 3: By Another Believer [CC BY-SA 4.0 (https://creativecommons.org/licenses/by-sa/4.0)%5D, from Wikimedia Commons