Penny press is a term that refers to the one cent newspapers that began circulation in the 1830s because advancement in printing technology. These newspapers allowed news to become a mass medium because of their increased accessibility to the lower and middle class compared to the more expensive newspapers of the past.

Benjamin Day, the publisher of the most popular penny paper The New York Sun, transformed the daily newspaper from something narrowly focused with low distributions that was not equally accessible, to a mass produced medium. He conceived of a way to get people who rarely read newspapers, or who never thought to buy them, to want to buy them, and buy them daily. (Brazeal) 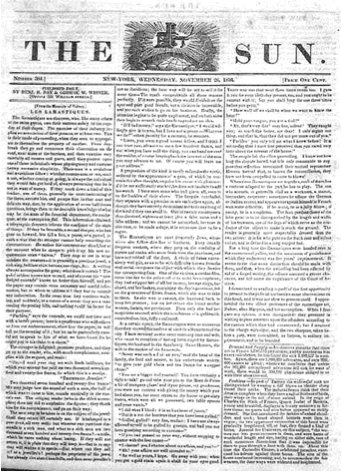 Day’s plan for The New York Sun helped to usher in a business model, and market system, that made print newspapers viable for the new mass medium. In the editors notes of the sun Day said ‘‘The object of this paper is to lay before the public, at a price within the means of everyone, ALL THE NEWS OF THE DAY, and at the same time afford an advantageous medium for advertising’’. Day’s ability to apply these ideas to, and capitalize on, the unique qualities of news media were qualities that have become permanently associated to the modern daily newspaper. They are also the qualities that justify labeling the penny press as a mass medium. (Brazeal)

The unique qualities and techniques of The New York Sun, and other penny papers, have directly contributed to modern journalistic trends as they created new readers and markets. They created human interest stories which transformed into tabloid style journalism, reduced the time between an event and publication of its report, the stark competition in the market between penny papers slowly grew into yellow journalism, and their need for low priced, quality content, laid the foundation for wire services later in news media’s history.  (Campbell)

The penny press helped incorporate print news, and news in general, into the mass medium we see today. It created competition allowing it to be accessible by all people. It transformed journalistic reporting into something tailored for all readers. Ultimately, and most importantly, it created the conditions to made news media accessible to everyone.

Image Attribution: The image used in this post is in the Public Domain