The Shannon and Weaver model was developed during the second world war to decipher a plan to decide which channels of communication would be most effective.

Contrary to the process school, there is the semiotic school which, is mainly concerned 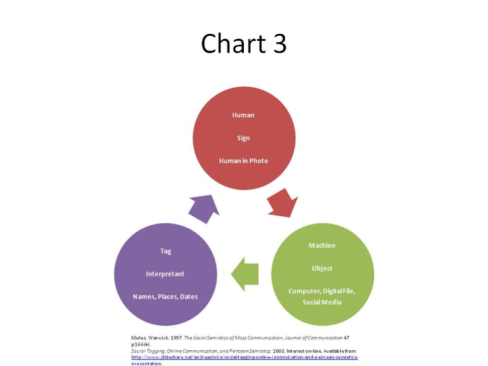 with how messages interact with the people that receive them. The semiotic school focuses on semiotics which is the science of signs and meanings as opposed to the process school which focuses on the efficiency of messages. The main study in the semiotics school is of text and culture (Fiske, 1982).  The photo to the right describes the semiotics of social media and can aptly demonstrate the differences between a process school model and a semiotic school model. Another example of a model of communication that differs from the process school is the ritual view of communication. The ritual view of communication focuses on culture and the maintenance of society. Little focus is put on the transmission of messages but on how well messages can construct and maintain a culture. The ritual view is largely inspired from religion and highlights the activities such as the prayer, the chant, and the ceremony (Carey, 1982).

John Fiske, a world-renowned media scholar, outlined the ideas behind the process school. John Fiske serves as an author and a media critic. He mainly focuses on cultural studies, popular culture, media semiotics, and television studies. Fiske has written many books including Introduction to Communication Studies as well as Media Matters. John Fiske was a controversial scholar for his time period and suggested ideals surrounding cultural meaning. Fiske stated that popular culture could serve as a resource for ordinary people, instead of past ideals stating that media and popular culture nullifies individuality. John Fiske recognized the unique and varied backgrounds that audience members originated from and hoped to spread those ideals to other media scholars (Jenkins, 2010).

Jenkins, H. (2010). John Fiske: Now and the Future. Confessions of an ACA-Fan. Retrieved from http://henryjenkins.org/blog/2010/06/john_fiske_now_and_the_future.html.