Propaganda is any type of mass communication strategically placed in order to gain public support for an issue, program, or policy. It includes, but is not limited to, media such as advertising or publicity. (Campbell et al, 2017). Propaganda has traditionally been used by governments in order to rally people behind political agendas that in some cases might be unpopular or controversial, such as a nation’s war effort.  It can also be used by opposing sides during wartime to undermine the opposition and garner support for the home nation. For example, Figure 1 is a publicity poster created in 1941 by the UnitedStates Navy during World

War II which shows Japan, represented as the terrible snake, being bombed by the stealthy eagle representing the United States.

The purpose of propaganda is to influence individual actions or behavior. Weiss (2009) explains this purpose as an agenda-setting theory in which media, via propaganda, tells people not necessarily what to think, but rather what to think about. An argument can be made that media serves the interests of those in power by determining what news coverage to select and how to promote it, making the media a propaganda appendage of the government in power. An example of this is political propaganda during the Vietnam War that was initiated by the government and disseminated by the media in an attempt to sway public opinion in favor of the war. (Danesi, 2013).

Initially propaganda gained attention on a mass scale during World War I.  Lasswell (1980) considered the impact that propaganda had on the war front, particularly including United States President Woodrow Wilson’s strategies in spreading unity at home and discord abroad. For example, propaganda was used as a massive recruiting tool, rallying civilians to enlist for combat. Additionally, propaganda was used a political tool to sway public opinion in favor of war in order to avoid political unrest. According to Lasswell, propaganda was so influential in World War I that modern wars must now be fought on three separate fronts: military, economic, and propaganda.  Lasswell even goes so far as to conclude that propaganda “is one of the most important instrumentalities in the modern world.” (Lasswell, 1980: 227).  In 1927, Propaganda Technique in WWI was published, suggesting that propaganda directly effects people’s politics, family relations, and their general outlooks or behavior. (Danesi, 2013). This behavioral influence by propaganda could be likened to the way a hypodermic needle affects the human body.

A contrary position is that that propaganda does not influence a person’s behavior or opinions. This position is adhered to proponents of the “limited effects theory,” which initially gained popularity in the 1930s.  Baran and Davis (1995) explained that contrary to popular beliefs, most people are not directly influenced by propaganda.  Rather, adults are sheltered by any kind of direct manipulation by social institutions such as friends, families, or coworkers.  By the time people reach adulthood they already have strongly held beliefs and convictions that propaganda is not likely to change. Ideologies such as political beliefs or moral standards are firmly rooted within a person, and only a very small percentage of people will be directly influenced by propaganda. The limited effects theory represented a major shift in thinking about propaganda from the early 1900s immediately following World War I. 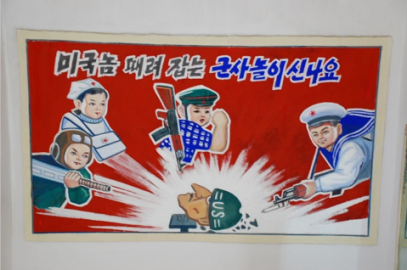 In modern times, propaganda is still actively used by governments to promote their political agendas, sometimes even to the exclusion of competing viewpoints. Consider Figure 2, which was a propaganda poster found in a primary school in North Korea. It depicts young North Korean children who are armed and in the military actively firing upon and destroying the United States. Ma (2016) specifically focuses on the authoritarian governments in North Korea, China, and the Soviet Union. These regimes actively spread propaganda by closely censoring any type of media that might be considered unfavorable to the regime.  However, these governments are now facing serious challenges to their control of anti-authoritarian propaganda due to modern advances in technology.  The Internet in particular has proven a serious threat to governmental censorship of propaganda because “anybody with some Internet savvy can probably go over the ‘Great Firewall’ to access whatever they want.” (Ma 2016: 48).  Therefore, technology makes propaganda even more accessible than it was during World War I. It is highly likely that with the rapid increase of technology in a digital age, the issue of how to define propaganda and assess its impacts on individuals and society will need to be revisited frequently.

One thought on “Propaganda”