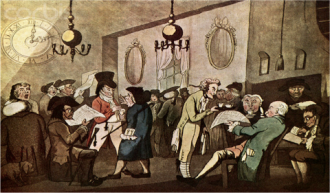 In 1964, German philosopher Jürgen Habermas defined the public sphere as “a realm of our social life in which something approaching public opinion can be formed” (Habermas, 1974, p. 51). Apart from this, he states that public sphere is the bridge that connects society and state (Soules, 2007). Because of the public sphere, individuals can congregate, decide what they need from the state, and then directly express the concerns to the state. The concept of the public sphere evolved in Europe during the 18th Century. During this time the bourgeois, which consisted of white males, was the creator of public opinion (Habermas, 1974, p. 51).

Image Attribution: Image #1: this image t is in the Public Domain; Image #2: “Dimilitarize the Police, Black Lives Matter” by Johnny Silvercloud is licensed under CC BY-SA 2.0